"Eeeh," says Amie. "I wouldn't worry about it. That's just how Bina deals." 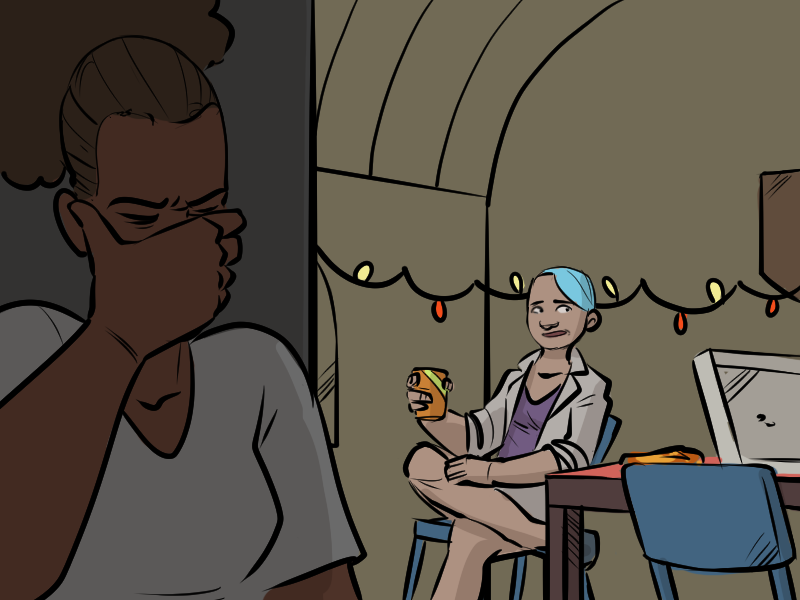 "I mean this is how she deals. She runs. I mean, most of the time she runs at whatever it is rather than away but - you get the idea."

"I really don't," says Kendra. "We've been through a lot, but I barely know her outside of all this… craziness. I guess I pushed too hard."

"You hardly did anything," says Amie. "Look, I don't really know her that well either. She's good people but I'm just saying, if we're watching TV and I don't want to argue about what to watch next, I just ask her about how her girlfriend is doing and zoom! She's outta there."

"Do you really do that?" asks Kendra.

"No," says Amie, finishing her drink and dropping the can onto the table. "Just once or twice by accident."

"You think all this has something to do with her girlfriend?"

"I don't really know the full story there," says Amie. "And even if I did, no offense, but it's not something I'd talk about - you know - without her here."

Unclever title:
I don't remember her last name coming up either. I even checked back at Elizabeth's introduction, the Q&A session with Kendra in the Moment, and Amie's introduction to Elizabeth. Wasn't mentioned in any of those places, so I don't think it's been mentioned anywhere in the comic at all.

Almonihah:
I don't recall Elizabeth's last name being mentioned, but I've been wrong on stuff like this before.

Thanks for checking! I was pretty sure I hadn't referenced it anywhere, but I couldn't be sure.

Ah yes! That was it. Thank you Dave. I'm definitely using this one. :)

auronblidook:
Where are these retcons I keep hearing about? New reader by the way!

Hiya! Thank you for reading! Wolph and company have you very well covered on the Retcon front.

Thinking about that. New users! What do you think the best way to communicate how the retcons work would be? I might put a card at the very beginning explaining the mechanics, or I might add it in the "About" page, which is currently pretty bare right now.

What do you think?

Tux:
What? But I–where's the Next button? I could swear I pushed that thing like 1210 times over the last two days…
This, dear author, has been the most scrumtrulescent piece of sci-mostly-fi comic reading I've had the pleasure of greedily devouring in a very long time. I'm absolutely hooked.

Hi Tux! Thank you for reading and I'm really glad you're enjoying yourself and well done on your use of scrumtrulescent. Truly a word that is not used nearly often enough.