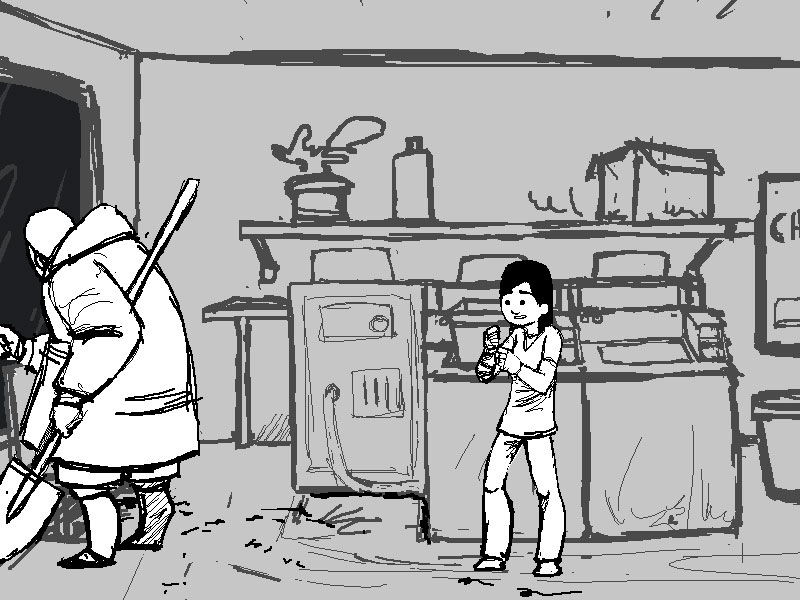 He's not looking at her, he's just turning back from locking the door, she could just clock him in the face and then… what? He'd maybe fall against the already locked door. That's assuming that it even phased him, he looks like he weighs three hundred pounds. Bina barely weighs a third of that.

And he has that big metal shovel. The shovel she suspects he used to incapacitate an elderly relative of his, so he doesn't appear to have issues with using it on people.

Fuade:
The best course of action is to get the hell out of dodge as fast as possible. Whatever may happen, going along with Shovel Man is one of the worst possible things you can do

There are two other exits from this room that Bina knows about, aside from the one that Gregor just locked. There's the door to the forbidden staff area, which is where the entrance to the don't-go-in-the-basement probably is. Then there's the back door, past the snack machine. It used to lead to a parking lot, but now leads to the condo construction site.

She could probably outdistance him, at least briefly, if she ran now, Bina's quick on her feet and he's not looking at her.

epoxy:
> Wait, does Gregor think you're his partner in crime?

However, if she runs, any chance that he might think she's on his side, would be gone. He'd know she knows.

She also has no idea if he's already locked one or both of the other doors already.

But, if she's going to run, now is the time.

Go or stay? Talk or run?