Seems like naughts would crawl up the chute after them, so I'm guessing bin? Though this is odd behavior for naughts, to just gather in a quiescent cluster like some sort of freakish Beard of Bees.

There is a banging noise coming from the chute mixed with angry shouting along the lines of "Stay down dammit!" 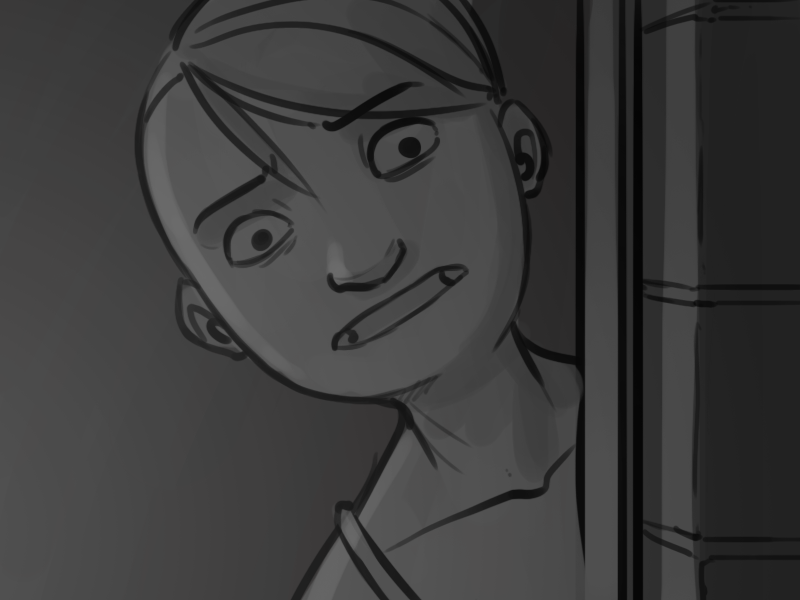 [size=8]"I want to know how the heck they got up there?"[/size] whispers Castillo.

[size=8]"Better question,"[/size] says Elizabeth. [size=8]"The better question is why they're all here trying to get her and not out grabbing other people."[/size]

[size=8]"The better question,"[/size] says Amie. [size=8]"Is how do we talk to her without attracting the attention of that crowd over there?"[/size]

Shazer:
Holy hell, I finally made it and it has been a well worthwhile journey.

This is marvellous stuff, and all the more incredible when I realise it's been three diligent years in the making. I can totally understand it taking four years to write a novel to completion. Having said that, it's telling that this didn't feel like I'm reading a story that the author's 70% done with, more like I got 70% through a good book, and now I'm going to put it down, go do something else for a bit, and pick up the story later. I'm not even completely sure if we're at 70% through the story, but it doesn't bother me in the slightest when I'm in such safe hands, so to speak.

The pacing's not perfect, which is weird to say considering: I can't remember a scene which overstayed its welcome while I was in the process of reading. Maybe because I knew I was reading a forum adventure and was mentally prepped for that? I'm not sure if you want to do any editing once it's over and trim scenes which end up overlong compared to the finished whole, this being a web"comic" (illustrated serial story, Online Edition?) and not your first draft for a different medium.

I love your characters to pieces as well (so many fantastic ladies in so many… genuine? non-lazy? configurations of Powerful yet Flawed), but I'm a sucker for empathic and understanding main characters soooooooo

Literally the only time reading this felt like a slog was getting my head around High-Density Time Bullshit. I'm not well-versed enough to make calls on whether it "makes sense" in any meaningful version of the expression, so I can quite happily take it as a slightly-less-understood-yet-narratively-credible source of challenges to overcome (and the tools to master so they might overcome said challenges).

tl;dr this is great stuff and I've no regrets that this is how I've spent the last two and a half work days. Keep up the wonderful work!


Also: I dunno how many others got this vibe but I got a really strong Mutewood (one of the earliest (completed!) adventures on MSPAFA) feeling from your art switch when we landed in the hospital. Really added to the sense of dread, much of a given as it was that things were going to go pear-shaped, and fast.
Thank you for reading! Aaah!

I like the term 'illustrated serial story'. I'm going to keep that one. I have used 'comic' in the past, despite the lack of captions and text boxes, but I think that one is much more accurate.

The time travel in this comic is… pretty intense from a complexity standpoint in comparison to something like Dr. Who or, to be honest, most time travel stories. I have no defense for this, I know it's confusing and has not been entirely explained, the only thing I can say is that I thought that it sounded cool at the time.

I don't plan on doing another version of All Night Laundry once I'm finished this one, like turn it into a full comic or anything. I really like the way it's gone, and I think it's important to preserve the way it was constructed. That's why I've been making sure to quote all the suggestions by name etc. I think how this has been made is as important as what has been made.

I do intend on doing more creative stuf fonline though, I have so many plans for once this is finished.

Xam:
It might be difficult, but I suggest making multiple versions of the end anticipating multiple suggestions and the version you end up going with is dependent on what suggestions we actually give to Bina, Kendra, Elizabeth, and the others. You could even give us a grade of some sort afterwards based on how good of an ending we managed to achieve as compared to the other possibilities. This would be one fun test to take!

This would keep the illusion of interactivity even though you already planned out the rest of the story. The only issue is if we managed to come up with suggestions that you didn't anticipate.

That's not a bad idea, and in an ideal world where I had infinite time and energy, that would be totally viable, but it would be several orders of magnitude more work then doing a single ending.

That_One_Guy:
I love the interactivity of a forum adventure, but I've always felt a good story takes priority over incorporating reader suggestions, so if you feel the need to make this story less interactive approaching the ending, I'd be perfectly ok with that.

Thanks That_One_Guy, that mirrors my thoughts on this too. I love the interactivity, but I think the ability to work on this as a chunk could be necessary for wrapping things up nicely.

smurfton:
It's not really a binary choice. You can give us meta-knowledge of where we need to end up to guide our suggestions better than just pushing towards things in the narrative. That way, we'd be able to have some interactivity within a rigid frame. I like the interactivity as well, but to be honest, I don't give real commands all that often, so…. I'd be totally ok without it.

Thanks smurfton! I appreciate all your comments even when they're not commands. :)

The problem with allowing any interactivity is that I still wouldn't be able to treat the remaining narrative as a single chunk. I'd still have to work reactively on a micro level, and it's really easy for small micro-level changes to ripple out into larger ones, especially in terms of how they change character interactions, decisions, and relationships.

For example, I did not expect most of our band of merry adventurers to end up down in the basement. I did kind of expect them to split up, but I expected Bina and Kendra to be in different parties, and for Bina's party to stay upstairs.

Reader suggestions and how the characters bounced off each other as a result created a wildly different outcome then I was expecting without anyone really suggesting 'Split into two teams and also Bina and Kendra should be together.'

Gimeurcookie:
I think it's a really good idea to just hunker down and get the last part of the comic done. There's been ton of interactivity and I think when any user suggested adventure gets to it's final chapters the suggestions have to be closed down so everyone can sit back and watch the big game.

Don't think of it as depriving users of being able to interact, but think of it as finally allowing readers to see what they've worked up to. How their suggestions throughout the whole comic has amassed in to the final great countdown. The story wouldn't be same if they hadn't suggested, and in a way that means it's still very interactive.

At least that's what I believe and have told my readers. Basically when we come upon the last 10% of the story, I'm going to sit back, review what we've done so far, what we've learned, what we accomplished and finish it off. From what I gathered from my own group of readers they seem absolutely fine with this and I got the thumbs up.

Every readerbase is different but always make sure to do what's best for your comic! If you're worried about a looming period of time that might completely halt your comic, or cause you to not update to the quietly you want to update it to, then by all means I think everyone can understand if you gotta do what you gotta do.

People tend to prefer a finished comic to a dead one! (Or worse, a Naught Comic that keeps growing and adding more limbs because it feels like it has to with no end in sight!)

Thanks Gimeurcookie! I'm really glad to hear I'm not the only person working on a long-form interactive illustrated serial story to have had the same thoughts. That's… actually really gratifying. Thank you for writing this.

Describing perpetual serials as 'Naughts' is weirdly appropriate if disturbing…

ForestGardener:
I am OK with less interactivity as we approach the end. You said you are steering the narrative. As we get closer to the target that is the conclusion, more precise steering will be required to hit that target, and diversions will cost more time compared to the remaining plot. Some interactivity is still good though. I personally would like to see the readers' touch on the end. It is probable that we will come up with some really cool stuff that fits. Clever solutions are one of the strengths of interactive adventures, after all.

If we know what the objectives are, by which I mean if the characters [think they] know what the "win condition" is and have a rough idea how to get there, then our suggestions will be aimed at getting there. intrepidPioneer is taking this route with Lucidstuck, possibly by accident (I'll ask in the next Q&A). That adventure is more structured: we essentially have a checklist of plot points to reach. The hard part is checking them off. If All Night Laundry has a surprise end, a difficult to find end, or a specific sequence of events end, etc., then this may not be an option.

The ending I have in mind is neither surprising (exactly) but the path to get to it is narrow and, more important, I think that having the end be non-interactive will make it more satisfying.

Honestly, this adventure wouldn't be the same without the interactivity. Maybe it's a bit risky, but I have faith that you can deliver a satisfying ending, even having to deal with the choices we make. Worst case scenario you might have to have a non-interactive epilogue to deal with unaddressed plot-points, but I don't think it'll come to that!

You have more confidence in me then I do. Thanks badatnames. :)

I do plan on having a short epilogue, but we'll see about that when we get there.