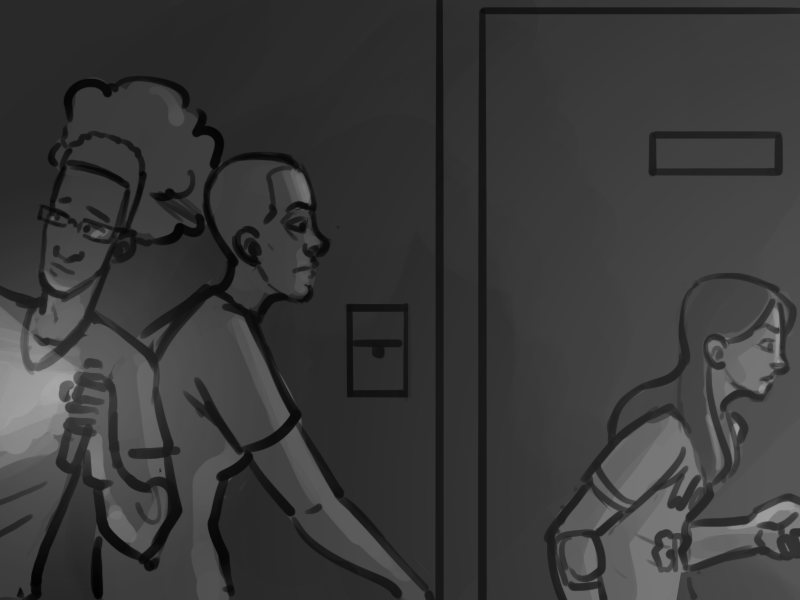 "Well it's grabbing people with the Naughts," says Kendra. "That's that mystery solved I guess. Naughts are built to abduct people."

"That makes sense if every 'gift' it gives is directly focused on feeding the Botfly, but I wasn't talking about the Naughts," says Bina. "I mean the thing with Amie. How does that feed it? You can feel it right? It's happening right now."

"It's like being a little drunk," says Emmie. "Or - no - more like having far too many energy drinks. I hate doing anything without a plan and if I can manage it, a checklist. It makes me good at my job but terrible at parties."

"You do fine at parties."

"I'm just saying, what the heck am I doing charging off into the dark like this?"

"Is that it? Is it manipulating events to be like a Doctor Who episode just to make us reckless? That seems too small…"

You know, an upside to having an organically developing story like this is that in some ways it feels more natural. More how the situation would actually progress. Life, after all, rarely has a standard plot, and God laughs at the plans of men and nations. The curveballs, the setbacks, the expansions of "plot" or raising of stakes, and yes, the stagnation and coasting that happen so often in life? No one can go back and edit those either. Things get over-promised and under-promised in life all the time. Life often does not have a satisfactory ending for any one person or period, though it certainly can. More often than not, "what actually happened" does not make for a good story.

So despite the absurdity of the premise, despite the looming difficulty of dealing with the botfly without a cop out (or perhaps because of them), All Night Laundry feels realistic. For we are all playing Calvinball with our lives. So long as you continue to make an effort at having the characters adhere to the rules the rest of us must, it will continue to feel realistic.

Thanks ForestGardener! That is an interesting perspective on Calvinball. In my experience, that sensation lasts until it's over, and rather than being 'living' breathing characters, they become static characters on a page.

I'm really lucky, as a player of Calvinball, because my budget is what I want it to be. The story isn't constrained to a set number of episodes, or by actor availability, or even sales numbers like comic books. It's constrained only by my ability to keep going, which, thank heavens, has so far not been a hard limiter. I can't create an infinite amount of content on a day by day basis, but I can keep this thing going until I can find an end that I'm happy with.

For a lot of people playing Calvinball, that is a luxury that they literally cannot afford.

smurfton:
Zach, try to get some sleep tomorrow. Two images in an update doesn't seem worth your staying up til 4AM for an update.
Congrats on 3 years.

Thanks Smurfton! Yeah, I do need to be doing my time management better. Lotta late nights this last little while. I took today off though, so I got to sleep in, which was nice.

a52:
Three years! Wow! (This calls for a reread!) We've come a long way from the waitress with the basket. In response to the anniversary as well as your Calvinball posts: If there was anything you would redo plot-wise about this comic, what would you change? If you were to make it into a proper graphic novel, what would you do differently?

Also, I love that Bina is still wearing the World's Best Grandma shirt, at the same time she's acting more and more like Three.

Thanks a52, and thanks for sticking with me! This goes for everyone who has stuck around since the early days. I am very grateful. It really means a lot to me.

What would I change? Eeeh… that's a tricky question. I can't regret what this has turned into, but I also can't deny that making it about time travel, even weird sideways time travel like it's become, was a decision that I have been paying off for, at this point, literally years.

This was originally a ghost story, and it was all supposed to take place in the laundromat itself, like a one-act play. The story we have is quite a bit better by this point then the shorter one would have been. I am a much better writer now than I was back then, three years of daily experience writing fiction will do that for you.

So I suppose making it about time travel is something I wouldn't change.

I spent about half an hour thinking about this and, while I know that there are things I would change and tighten or cut if I were writing this all at once, looking back on it, it's almost all important. There's a lot of dithering and a lot of slice-of-life stuff that you wouldn't include in a non-interactive story, but their presence in this one is necessary because you, the readers, need far more context than passive readers because you need to be able to make decisions.

So I guess the only thing I'd really change is the stuff around day 795, where I went really non-linear and was running two scenes at different points in the story simultaneously. That was awkward and confusing for everyone, including me. Toss in the scene that we missed entirely with Bina learning how to use the Moment and I'd be pretty happy with everything as is.

I also love the "World's Best Granny" shirt. It adds a layer of complete absurdity to what would otherwise be a pretty grim series of scenes. I like Bina's banana shirt for much the same reason.

Aaah! Thanks Tegerioreo! Thank you for reading and suggesting for so long. Your constant attention and suggestions have been a real help over all of this time. Thank you. Thank you, thank you.

Colby:
wow congratulations, i dont think ive ever worked on anything that long before.

Thanks Colby! I haven't either! The closest would be about eighteen months I did on a game project once for work, but that's the closest!

Kree:
And wow! Has it been 3 years already? What a wild ride it's been! Definitely the best laundry-based fiction ever! :D

Thanks! I don't think that's a really uhh… overburdened field of fiction, but I will take it! Thank you!

Thank you Wolftamer for all your excellent suggestions and your continued reading.

You are all lovely people. Thank you for taking part in this strange thing we're doing. Despite the fact that it's been three years, there are still times when a suggestion or an idea will make me positively giddy. It happened today.