"No, Gregor didn't really elaborate much."

"All right," says Elizabeth. "Well I've told Edwards and Castillo about it. They're going to radio it in when they can get a clear signal, which they apparently can't because their radio's aren't working 'due to the storm' and yes, before you say anything, I am concerned about that too." 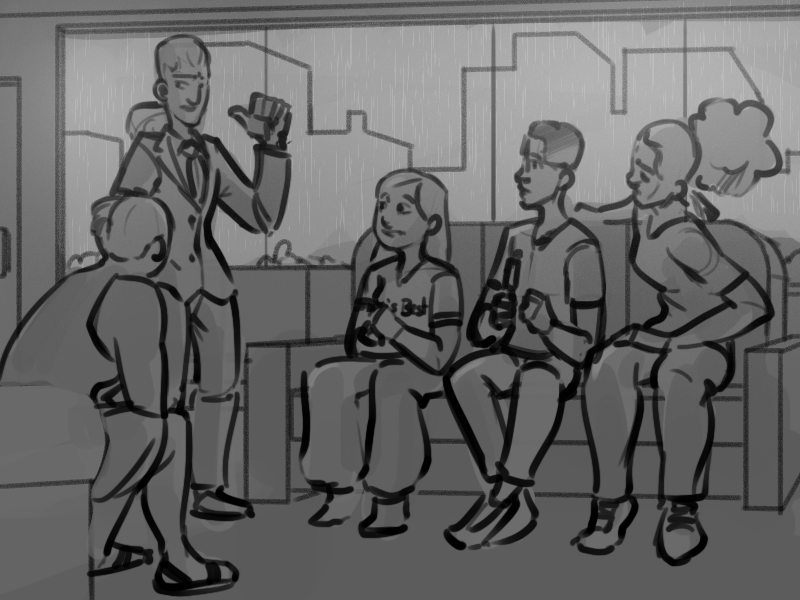 "Oh good, 'cause I'm quite concerned. Is there another way out of this room? I mean aside from that one easily blocked door?"

"Uhh, yes," says Emmie, who is sitting between Bina and Kendra and looking more than a little worried about what he's gotten himself into. "There's a door out to the balcony and then a little staircase down to a landing where you can get to the car park. People hang out there to smoke."

"Yes," agrees Emmie. "Which means the disreputable appeal of the activity is even greater than for people who don't know the risks."

"I am concerned," says Elizabeth, ignoring the banter. "But not enough to let you off the hook. Start talking."

rachelcp:
It could take quiite a while to tell everything but we can at least give a shortened crazy sounding version, Kendra probably can tell the story in the sanest sounding way especially after being on the receiving end of insane explanations.

Make sure you talk about how you ended up in the laundry, meeting Gregor, Naught monsters, multiple Binas, Dead Kendras and the elaborate saving of Elizabeth

"We don't have much time," says Kendra. "Even assuming, you know, we aren't interrupted. We should keep this to the important bits."

"All right," says Bina, trying to collect her thoughts. "Well… I guess this all started because, last night, I realized I didn't have any clean clothes…"

sporkaganza:
>West Philadelphia, born and raised, on the playground was where I spent most of my days

You have no idea how badly I wanted to use this one.