But the two police officers are already out in the hall. 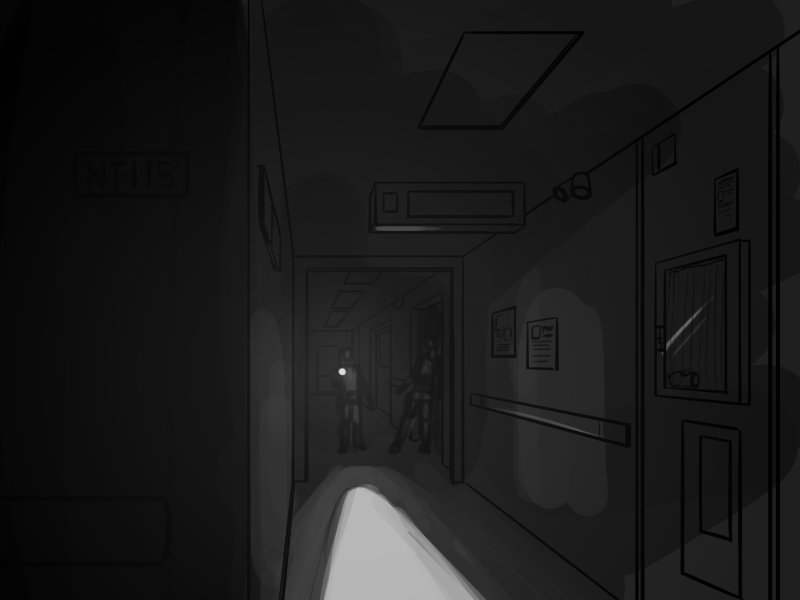 They pile out into the hall.

"It's where we got the coffee," says Pink Pants. "So down here."

btp:
> Let's find out those cop's names! It's silly to call them by their pants-color when it's pitch black out.

"We seem to be getting off on the wrong foot," says Bina, glancing up and down the hall trying not to scratch at her arm, which feels like a number of ants have gotten trapped under the gauze bandages. "I'm Bina and my friend here is Kendra. You already know Amie."

There's a pause as the officers open the doors. Bina realizes that she's talking slightly too loud, she clamps down on her nerves and breathes in through her nose. While doing so, she notices that while neither of the police officers have drawn their guns, they do look alert. Maybe the dark is spooking them, or maybe they're picking up the tension radiating from her and Kendra.

Amie, for her part, just looks excited and seems to be trying to catch her eye. Bina ignores her for now, concentrating on the cops.

"What are your names?"

"Glad to meet you," says Bina, and for some reason, feels a little better.

You may notice we now have a favicon! Thank the wonderful smurfton for that. They did fourteen of them and they are all great! You can see them here.

I did another blog post. Unsurprisingly, it's sort of about Homestuck and it's also depressing.

Writing this series has given me a lot to think about.