"Why would you think that?"

"How all the stories work?"

"Well no, I mean yes but - look it clearly didn't cause a problem so-"

xooxu:
The idea is that you wouldn't act because you didn't know everything. It's shitty of us, we're aware. We're treating you like a kid because you're not prepared for what's down there. The man with the shovel is actually the least horrifying part of this.

"For us!" says Kendra, throwing her hands into the air. "You need to pull them out. Look, I'm - we're sorry - we should have warned you. That's on us, but, and I'm really not kidding here, you absolutely do not want to send people down there. There is a lot of bad stuff in that hole. Worse, way worse, then one guy with a shovel! You have to call them back!"

"Did you miss the part where I said they were out of communication range? You couldn't get a military satellite to transmit from down in that hole, let alone walkies, and what kind of worse? Oh god, is that… thing down there? The one in the… uh… place?"

"Yes. Maybe. We're… not actually sure about that one, but there are others. At least a dozen, and something else, that is very large, like a bear but bigger."

"They're talking about time travel aren't they?" says Pink Pants.

"They're dancing all around it, trying to not actually say the words, but it's time travel. Right? We are watching a federal agent have a heated discussion about time travel." 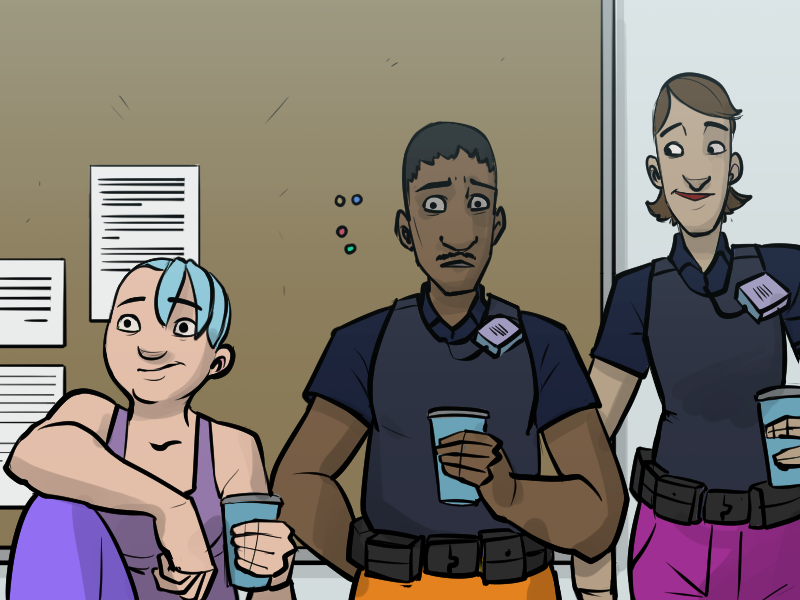 "So it's true," says Orange Pants. "This confirms it. The lieutenant really does hate me."

"If this turns out like the furry convention, I'm moving to Ontario."

A moment later, Pink Pants has another idea.

"On the other hand, while we are babysitting nutters - no offense Miss -

"- We are not out in the unseasonably cold rain, standing in the middle of a malfunctioning intersection, trying to direct traffic during a city-wide brown-out, so… there's that."

"Ah," says Orange Pants. "I guess that's a bit of a silver lining there yes."