Primary Temporal Position: 1033
Reset Temporal Position
tegerioreo:
Continue with the part about getting Bina to the hospital and how Kendra persuaded her sister and Friend to help out with this obviously shady business.

"So what happened next?"

"Nothing particularly exiting," says Kendra. "I ended up nearly having to sit on Amie to avoid having her wake her younger self up and wreck everything with paradox, but once I got everyone out of your apartment everything went relatively smoothly. Err, well it went smooth until Elizabeth decided not to get in the taxi."

Bina grunts at that.

"I didn't have time to argue with her, and Amie was sort of freaking out, not, like, scared so much as crazy excited. I just told Elizabeth to get her head checked and avoid the danged pit, then I left her there. I'm pretty sure she's not going to listen to me."

"How did you convince Emmie and your sister to help me?"

"Emmie spent a lot of time with Doctors Without Borders, he's lived in, like, eight different countries, many of which have been places where scared people wanting to get treated without official records is a regular occurrence. He barely blinked at all this."

"Melissa might put on a show of being a hard-case, but she didn't become a nurse just because she likes to wear teal. It took some arguing, she wanted to know why we couldn't just take you to Emergency and get you checked out by real doctors, but she came around quicker then I thought. You being so sick made a compelling argument."

Ged:
>Maybe the anesthesia just leaked out through cracks in space-time, who knows?

tegerioreo:
Yeah the botfly probably soaked up a lot of the anesthetic.

> Jokes aside this might mean that the botfly is very much messing with you internally which likely explains how you haven't died yet.

badatnamesbluhbluh:
>Re: We have the lamest superpower possible.

"Err…" Bina looks down at her toes. "I don't really feel sick anymore. I don't feel great, but like, I don't feel too hot or cold anymore, my head is OK and I'm actually kinda hungry. My knees hurt, but not nearly as bad as they did. I thought it was the drugs at first, but - I mean I'm awake. Emmie gave me a bunch of drugs, right? I should be asleep. Do you think… I mean, do you think the Botfly um…. did something to me?" 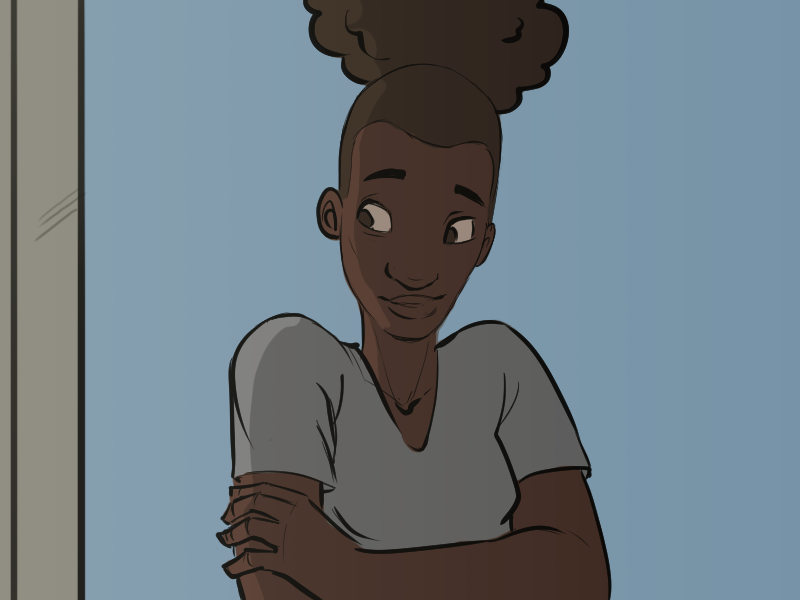 Wessolf27:
Uhm… I think Bina and Kendra's text had switched for a moment on this part <snip>

Xam:
Also does anyone remember what 'PTT' stands for? I forgot… :insolent:

By the way jack, ever since I first read the post with Kendra's introduction, I've wondering why you choose to bold Kendra's text? In addition, why is it Kendra's text that you only mark as visibly different from other people's instead of doing something similar with everyone else's speech?

Also, I think you mixed up which lines should be bolded starting with the line saying "Well, Elizabeth was….".

I did have two lines swapped. Woops! Thanks guys!

There isn't a huge reason for this, though I'd like to pretend there is. Initially, this comic used the Rubyquest style of described conversations over transcribed dialog, but I eventually dropped that because long conversations ended up being very unwieldy and also because (as you can easily tell) I like writing dialog.

When I decided to go with dialog, I knew that Bina and Kendra would end up talking to each other a lot so I gave her something to differentiate her from Bina. I gave Elizabeth a text colour because I expected her to join Team Punch-The-Botfly-In-The-Face waaay earlier then she did (there was a way to avoid the whole bein' conked on the noggin thing).