"Maybe… but I still don't feel really great about it. Like, it's not just lying to them, if they figure out we're lying maybe they won't believe someone who actually is in that kind of trouble next time."

"Well the alternative is that we show them your arm. It is, like I said, spectacularly convincing."

"It's also horrible, evil, and prone to causing spontaneous monsters."

"That is also true."

"Are you holding up OK?"

Bina is not sure she believes her. Now that her sister and Emmie are gone, Kendra looks very tired.

"You saved my life. Again. It's getting to be a habit." 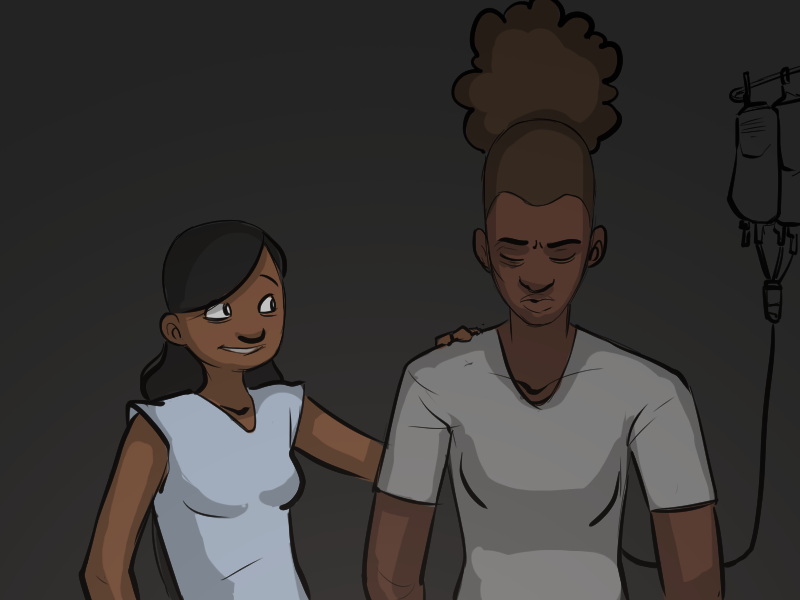 "Where is Elizabeth anyway? Back in the Moment? No, wait, that wouldn't work. Where is the Moment?"

"I have it here," says Kendra patting her pocket. "Elizabeth wouldn't come with us. She went back to her car to call her boss rather than come to the hospital. She's… kinda scary Bina."

"Yeah, but I don't think she gets how elaborate that was, and also, well, this is her thing, the whole supernatural deal. I tried to keep the details from her but that… didn't work out so great for a couple of reasons. She isn't going to be content to wait on the sidelines."

"Yeah, well, maybe that doesn't matter all that much to some people."

"I don't understand, what would she do?"

"I'm not sure," says Kendra. "I've got Amie in the emergency waiting area watching for her and Gregor in case either of them want to make trouble."

Hey everyone! So! How 'bout that downtime?

This has actually happened before, twice, and while I wasn't able to update here, I did update over on my tumblr.

I count that as counting, and there will be another update tonight as well.

I really need to get my website up and running. Enough Dark Souls, I am getting this done.