Kyky25:
>Read the secret message that is doubt on the note

Does it have a mysterious message on it? Of course it does. 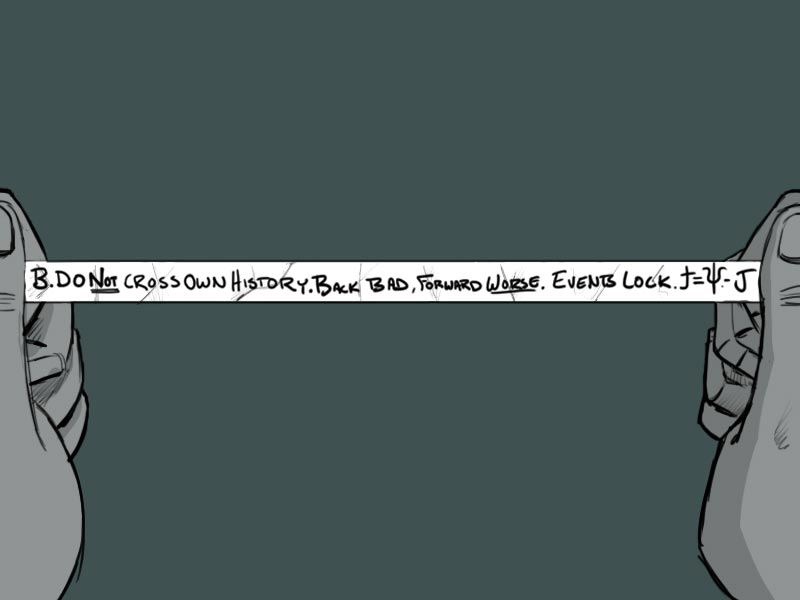 Seriously, Josephine, if you were going to go through the trouble of putting a crumpled up piece of paper in the back of a mysterious hole in the wall, which has been punched through a calendar, couldn't you use a 8.5x11? A post-it note? Journal page? This is terse to the point of incomprehensibility. And what is that little symbol at the end? A trident?

At least she wrote in English… mostly.

Bina is really starting to regret that she's majoring in journalism and not physics. If she were, this would probably make more sense. She DOES read some greek, from high-school, and the second to last symbol is Psi. The last one… is that Josephine signing her name at the end? The little dot might be a period, meaning that the equation is over, which makes Bina think that it's not a minus sign, but if it IS a minus si -

GIRL! The shout is loud and startling. She is to be moving her butt now!

This time it's the laundromat owner yelling at her.

epoxy:
> Go out and tell them you're okay, sort of.

She quickly pockets the tiny slip of paper. She doesn't care about his nephew, and she's not sure why they're so agitated by him being back in the laundromat. It's not great that he's back, but nothing about this is great, except maybe the citrus fruit.

Whatever, she'll go see what they want.

She opens the door, Piotr dashing out between her legs while she does so. Bina holds up her hand, blocking her view of the Whatever, and things…

… are much the same.

You are correct! It is a very tiny hole. Morphimus analysis (with diagrams!) is good, but the hole is only about five centimeters across, and while Bina IS a very small person (she's under five feet tall), her hands would probably not fit. At least not all the way to the back.

So… lets say she used a pen from the table.