Primary Temporal Position: 1003
Reset Temporal Position
Dave:
I'm no doctor, but when it comes to an injury or a possible injury, reasonable certainty that you might be able to do something usually means you probably shouldn't do it. If you have to do it, maybe do it really slow and carefully?

Is there a button thing to call a nurse?

Is there a clock, calendar, nearby laptop/tablet/phone/etc, anything to tell you when you are?

curiousTerminal:
Exhaust all your bedbound options before trying to stand, it's not a good idea to be moving around so soon after waking up in a hospital.

Yeah, that is true. Bina looks around at the headboard thingy above her bed. She hasn't been in hospitals a lot, but her Dad broke his leg skiing last year and Bina seems to remember that there were a lot more weird devices and stuff up on the headboard thingy when she went to visit her Dad than there are here. 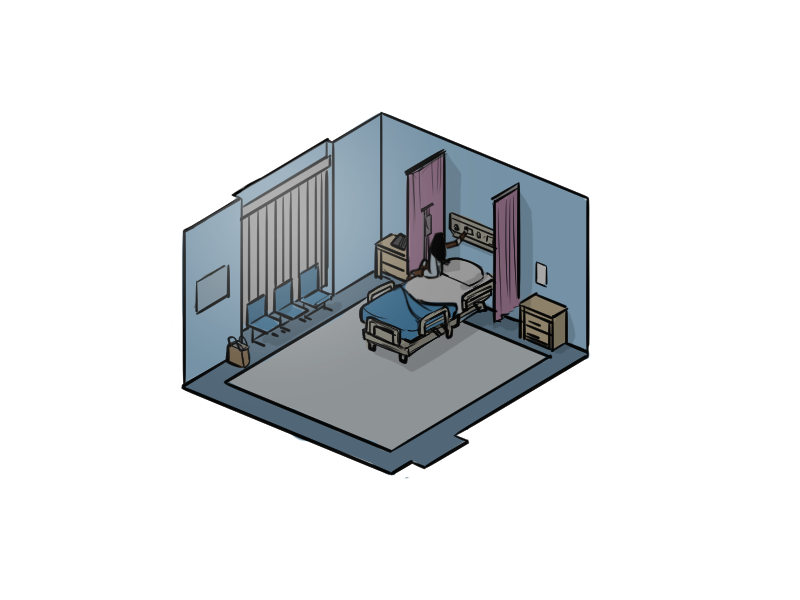 Maybe it's just a difference between Quebec and Nova Scotia hospitals but Bina doesn't think so. There sockets and plugs, but from what Bina can tell, they seem empty. There's nothing she can identify as a nurse call button. She tries pressing a few things anyway, but they turn out to not be plugged in, or just not buttons.

KanjiGirl:
Amie doesn't have short blue hair? Is it possible that she just decided to dye it?

Hah! Maybe she wants too, she's mentioned it a few times, but her Mom would disown her, like, instantly. Bina isn't afraid of many regular people, but Amie's Mom is on that list. She's like what would happen if you compacted all the destructive force and disdainful houture of a particularly urbane and well dressed tank battalion and packed it into a tiny little woman slightly shorter than Bina herself. A tank battalion who stalks her daughter on Facebook and leaves spiteful little comments whenever Amie seems to be having any fun.

Bina is not a fan.

xooxu:
Where's Kendra? It seems weird that she'd leave you by yourself.

Yeah, that is weird, and worrying. Bina was trying not to think about that.

a52:
>See if you've got a radio or landline or something to call the doctors on to let them know you're awake.

No radio, but there's what looks like a landline on the side table over there just out of reach. OK. Looks like getting up is going to be required unless she wants to start shouting.

Bina does not want to start shouting. The silence is starting to get to her. No hospital should be this quiet.

tegerioreo:
Yeah, let's swing those legs experimentally a few times before trusting our weight to them.

They don't seem too fond of the idea, especially the left one, which she appears to favor as her landing knee, but they're not entirely opposed to the concept. She's not going to be running marathons but she can probably manage a good totter, if she leans on the IV stand.

She isn't even considering unplugging the IV line. Unpleasant associations aside, she clearly needs the medicine.

Wessolf27:
>Hey there's a paper bag over to those chairs, maybe check out what's in them?

Dave:
Wow, neat! I apologize for adding an extra set of complication to the prize process. At first I was going to deliberately submit my entry late so I'd be ineligible, but that struck me as… I dunno, vaguely assholeish for some reason?

Special thanks to my roommate for sanity checking my work - I've never done LEGO laundry before.

Me: "What does this thing I built look like to you?"

Roommate: "…either a time machine, or a clothes washer."

Me: "How the fuck is it a time mach- okay, thank you for the input. Clearly I need to redesign this slightly."

Also, I noticed that the rightmost machine has its control panel on backwards and it bugs me every time I look at it, but it's too late to fix.

Hey Jack, I'm not asking for another contest or anything, but are you planning anything special for day 1095? That's three solid years and that's fucking insane.

Heh, no problem. I was a little surprised when your name showed up (and I had to go look up what exactly you wanted regarding the prize) but it was no problem.

As for the three year anniversary. I don't know. I might do something for that, but I think this 1000 days thing was the big one for me at least. I'll think about it.